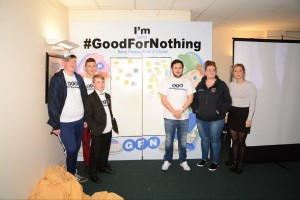 As part of Shankill Alternatives AGM, a packed room gathered for the launch of #GoodForNothing the latest project initiated by Alternatives.  The launch provided an opportunity for Alternatives to let the local community know what #GoodForNothing was all about.    Shankill Alternatives manager set out the background and context of how the idea had developed from the Shankill Youth Safety (YSP) wishing to build on their previous work to challenge the negative stereotyping of young people in the Shankill.   It was felt that positive actions by local youth generally went unnoticed or were ignored by the media for the more negative aspects of youth that usually grabbed the headlines and focused on the “Hoodie” culture.  YSP were keen to develop ways to recognise the positive voluntary work that young people were involved in.  The use of social media to provide a platform to encourage youth to engage in, and have their positive actions acknowledge was quickly identified in early plans.  The Good For Nothing Hastag & brand was put forward as a quirky way to turn a negative label of young people being deemed as good for nothing to a positive one that highlighted that many young people are doing Good For Nothing.

The launch then kick off with a screening of a short video of the #GoodForNothing activities over the previous 4-6 weeks that demonstrated the range and volume of the work that had been carried out in a relatively short timescale.  The video was followed by young people from different Alternatives projects speaking about their involvement in these activities to generate a buzz around the #GoodForNothing project.  From organising disability awareness events, community clean-ups, and remembrance events to cooking meals for residents of disabled and elderly care homes the young people spoke about their pride in doing something that made them feel good but also benefited others in their community.

The event also involved the unveiling of a mural produced by local artist Julie Kell, and commissioned by Alternatives. It was explained that the mural would not only promote the project but to act as a public notice board where activities under the #GoodForNothing could be written up directly on the mural and would be seen by those in the local community who were not using computers or familiar with social media formats.     Prior to the unveiling the audience we asked to write on post it notes examples of young people doing good in the previous month and stick them to the mural. This was to demonstrate that we all see examples of youth doing good but we need to let others know.

The event concluded with a message that #GoodForNothing is not about highlighting Alternatives but that every group, church and school etc. if they use the #GoodForNothing have a platform to spread the word that young people are doing Good For Nothing.